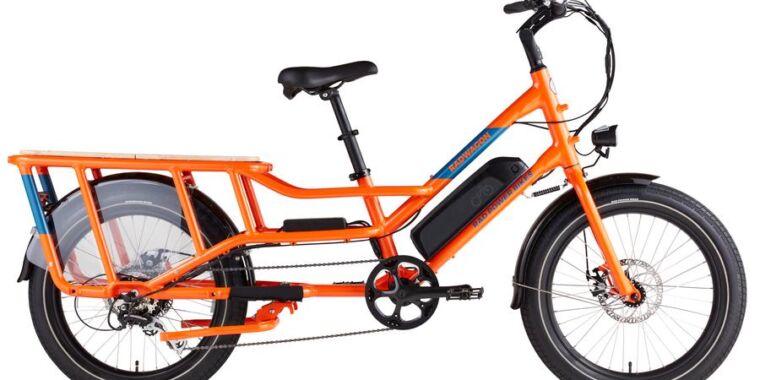 (Ars Technica may earn compensation for sales from links on this post through affiliate programs.)

The Salter household is very much a bicycling household, so when Rad Power offered me a review unit of one of its 2021 model e-bikes, I eagerly accepted. Rad offers a wide selection of models with a few important common features; all of them are powered aluminum-chassis e-bikes that retail for less than $2,000.

I tried the $1,899 RadWagon 4—a large, aggressively utilitarian, and very configurable cargo bike aimed at folks who need to haul passengers or groceries. After spending three full months with the RadWagon and putting several hundred miles on it, I’m happy to recommend it as an outstanding e-bike at a low price.

The RadWagon 4 uses a standard chain-drive mechanism offering seven speeds on one ring. The gears only work with muscle-driven power—the RadWagon’s electric motor spins the rear wheel directly, independent of the gearing. The motor can be engaged by both a standard power assist with selectable aggressiveness, or by an auxiliary throttle grip on the right handlebar—neither method is exclusive, which turns out to be a great feature on a big cargo bike.

Unlike some models of e-bike we’ve tested, the RadWagon looks and feels very much like a bicyclist’s bike, meaning that it’s primarily a bicycle with a motor attached rather than the other way around. Its Tektro disc brakes and Shimano gears and shifter are familiar and well-respected names from decades of un-powered biking. The 750 W geared hub motor is sufficient to get the RadWagon 4 up to 20 mph—fast enough to keep up with serious bicyclists on a moderate workout ride but not fast enough to blow past them.

Rad Power rates the RadWagon 4 at 45+ miles per charge. Your actual range will vary widely with how heavily you use the motor and how much cargo you’re hauling, but in our experience, that 45-mile rating is extremely conservative. Even with a 200 pound rider, 100+ pounds of cargo, and moderate-to-heavy power assist, we achieved nearly double that range.

RadWagon 4 comes with an integrated headlight and brake lights. The lights are always lit when the bike is powered on, but the brake lights become significantly brighter when the brakes are applied, just like a car. The front-mounted headlight is a nice safety feature for getting cars’ attention, but it’s insufficient for actually lighting up the road—we needed to add a battery-powered, handlebar-mounted headlight for serious night riding.

We also would have preferred a powered horn on the RadWagon 4—the simple bell it comes with is sufficient for getting another bicyclist’s attention, but pedestrians tend to ignore it, and it’s utterly useless in traffic with cars.

When it comes to looks, the RadWagon’s simple tube-frame chassis doesn’t scream “fancy bike”—but the aggressively industrial-looking design and long wheelbase does stand out. We got significant “Hey, nice bike, can I ask you about it?” attention from random passers-by, although much less than we had with the much fancier-looking Stromer ST2 we tested prior to the RadWagon.

Even with the motor completely disabled, the RadWagon 4 handles and feels like a high-quality bike—albeit a heavy one, at 76.7 pounds unloaded. That’s roughly double the weight of my usual daily rider—a Specialized Roll upright cruiser—but no heavier than the unpowered Madsen cargo bike we’ve used for hauling kids and groceries alike for years.

If you’re a moderately fit and experienced bicyclist, the RadWagon 4 is entirely manageable even without the power assist. If you’re a fit and experienced cargo bicyclist, the RadWagon 4 is downright easy, even without the power assist. As with any cargo bike, you do need to pay extra attention to working your way through the gears without “mashing”—but it doesn’t feel as punishing as our Madsen, which I have affectionately nicknamed the Pain Train.

With power assist, the RadWagon 4 is a pretty powerful bike, but it’s not a terrifying speed demon even on full power. Both its acceleration and top speed are still solidly within the higher end of “normal bicycle” territory—but they’re at the higher end of a sprint. Those speeds are now achievable with casual-to-moderate effort over very long distances, even with 100+ pounds of cargo on board.

We opted for the Large frame on the RadWagon 4, which accommodated both my long-legged 5-foot-11 height and my wife’s short-legged 5-foot-6 height—but if we had it to do over again, we’d select the Medium frame instead. The double telescope action on the RadWagon’s seatpipe makes it unusually adjustable, and although my wife needed to collapse both halves entirely, I only needed to extend the top section when I rode.

Work Without the Worker, book review: Microtasking, automation and the future of work

Edge is a good browser, but Microsoft’s heavy-handed tactics make it hard to love