Brad Smith, Microsoft’s president and newly named vice chair, laughed when he read that — agreeing with the sentiment, even if he has seen stranger things in his two decades representing the tech giant in its dealings with companies and governments around the world.

But there’s a bigger takeaway that transcends the weirdness of the TikTok talks and the quirks of the Trump administration.

In the new paperback edition of his book, Tools & Weapons, Smith writes that the situation showed it’s “possible to run a foreign technology service in a domestic data center with strict security, privacy, and digital safety controls in a manner that provides appropriate transparency to local government officials.”

“In effect, this creates the opportunity to consider a new technology regulatory model for those instances where the US government wants technology trade to continue across the Pacific, but in a more controlled manner,” he writes.

Smith elaborated this week in a GeekWire Podcast conversation about the paperback update to Tools & Weapons, written with co-author Carol Ann Browne.

Microsoft’s TikTok negotiations “really were the first example of a conversation” exploring the circumstances under which the US government be comfortable with this kind of scenario, and under what types of controls, Smith said.

TikTok has been set aside, for now, but the larger issue will come up again, he said.

“I think we’re going to see the Biden administration probably return to this set of issues, I would guess in 2022, whether it’s for TikTok or some other service, and it will ask, what controls does it want to put in place? The Chinese government will ask the same question: what controls is it comfortable seeing put in place?” he said.

“The real question is, is there a bridge across the Pacific that will ensure some level of interoperability between the two nations for these kinds of services, or will the two governments decide they don’t want that to exist?” he added. “And that’s going to be a big question for the future.” 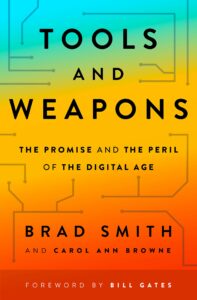 Key issues will include cybersecurity, privacy of American consumer data, and concerns about disinformation, he said.

“I think the tech sector needs clarity and stability, in terms of the regulatory structure that will oversee the movement of technology back and forth,” Smith answered. “I don’t think we can get clarity until we have specificity, and then we’re going to need some stability, meaning we need to have some confidence that the rules that are put in place will persist for a reasonable period of time.”

He explained, “Right now with the new administration in Washington, the discussions have been at a higher altitude and at a conceptual level. It’s all well and good to ask us what we might wish for, the truth is nobody grants our wishes in this space. We need the two governments to decide.”

Smith did cite three areas where he hopes there can be “a level of interoperability” between the United States and China.

Smith’s comments echoed some of the themes in a set of shared of “Trusted Cloud Principles” issued by Microsoft, Amazon, Google, and others Thursday in a rare display of cooperation among major cloud providers. One of the principles is, “Governments should support the cross-border flow of data as an engine of innovation, efficiency, and security, and avoid data residency requirements.”

Smith and Browne made extensive updates in the new paperback version of Tools & Weapons, including new chapters on the challenges created by unprecedented cyberattacks and the COVID-19 pandemic.

In the GeekWire Podcast discussion, Smith also talks about Microsoft’s new cybersecurity initiatives, his concerns about a lack of transparency and communication about cyberattacks among U.S. agencies and companies, and the future of work after the pandemic.

Listen to the episode above, and subscribe to GeekWire in any podcast app.

First we SPAC, then we take down AWS

Microsoft rolling out new Office UI for all Windows users: How to enable it