Rocket Lab’s next booster is stubby, reusable, and has a Bond-movie fairing 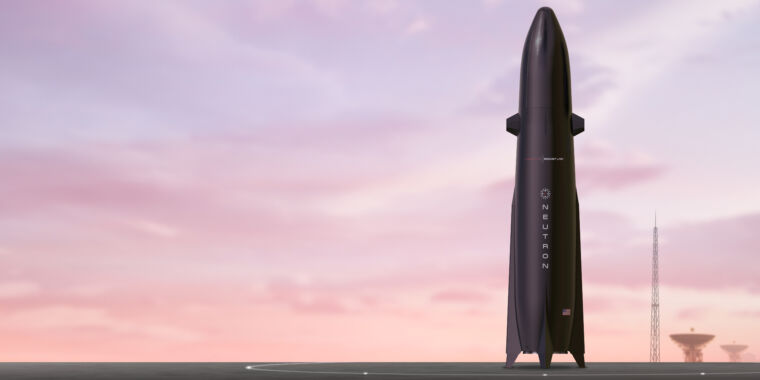 38 with 20 posters participating, including story author

In a slickly produced video, Beck shared the company’s thinking about how best to develop a reusable rocket that could remain competitive for decades. Neutron, he said, is optimized to serve both for the deployment of megaconstellations as well as geostationary satellites and even interplanetary spacecraft.

In its current conception, Neutron is a fairly stubby rocket, and Beck said this shape was designed both for launch and reentry into Earth’s atmosphere. Rocket Lab intends to use a wider shaped rocket to catch more atmospheric drag during reentry, requiring less fuel to slow down. The structure will be made of a proprietary carbon fiber for strength and less mass. The first stage will have fixed landing legs, and the rocket will only land back at the launch site rather than offshore. Beck said the costs of marine landings were simply too high, and the goal is to eventually be able to launch a Neutron, land it, and launch again within 24 hours.

The first stage will be powered by seven “Archimedes” rocket engines, which burn methane and liquid oxygen. Beck said the company will go for robustness and reuse with the Archimedes engine, rather than squeezing every ounce of performance out of the machine. The company is developing Archimedes in-house and plans to test fire components of the engine in 2022. The baseline goal is to reuse each first stage 10 times.

The upper half of the rocket also has some unique characteristics. The second stage will not be reusable, so it will be as light as possible and suspended above the first stage. It will consist only of a single vacuum-optimized Archimedes engine, fuel tanks, and the payload itself.

The payload fairing will open into four separate sections, release the second stage, and then close again before landing back on Earth with the first stage. Although Beck said it was entirely unintentional, the payload fairing looks strikingly like the rocket in the James Bond film You Only Live Twice.

In reusable mode, Neutron is projected to have the capacity to lift 8 metric tons to low Earth orbit and 15 tons in fully expendable mode.

As part of the video, Beck showed steel and aluminum—two popular choices for rocket structures that are also used for SpaceX’s Starship and Falcon 9 vehicles, respectively—being crushed upon impact with a blunt object. Then he showed a carbon composite withstanding the impact.

Composites are lightweight and strong but expensive. However Beck said the material was essential to make the economics of Neutron’s reuse work and that Rocket Lab would use an automated process of laying down composite structures. “That process is used in industry all over, it’s just never been applied to rockets,” he said. “You can put down meters of tank in minutes. So it’s kind of like 3D printing a rocket, but instead of 3D printing a rocket at millimeters a minute, you’re doing meters a minute.”

As with all rocket developments, there is a fair amount of uncertainty in when a project will be completed, especially one with novel features and lots of in-house development. Earlier this year, Beck said Neutron was on schedule to reach the launch pad in 2024, but he did not mention an initial launch date during Thursday’s online presentation.

Beck also declined to share a launch price for Neutron customers. The vehicle will be entering a medium-lift market where it must compete with the Falcon 9 rocket, which has about twice the lift capacity and an exceptional track record, as well as the Terran R vehicle, which is under development by Relativity Space and designed for full reusability.

“You don’t go through all of the pain of developing a launch vehicle if you don’t think you’re going to be competitive with what’s currently in the market today, and what’s planned for the future,” he said. “We think we’re going to be highly competitive.”

How to Prepare for Climate Change’s Most Immediate Impacts

An Injection of Chaos Solves a Decades-Old Fluid Mystery

How The mRNA Vaccines Were Made: Halting Progress and Happy Accidents

Halting Progress and Happy Accidents: How mRNA Vaccines Were Made