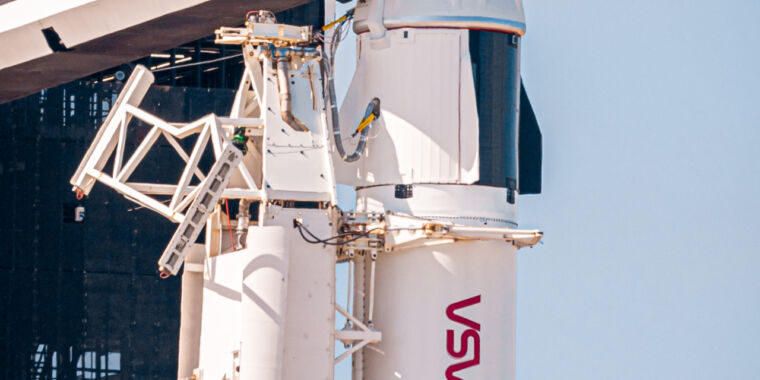 NASA and SpaceX had originally hoped to fly the next bunch of astronauts to the International Space Station in late October, but the Crew-3 mission has been subject to a handful of delays due to weather and health issues. But now, the mission managers say Crew-3 is ready to fly on a Falcon 9 rocket, with a liftoff set for 9:03 pm ET on Wednesday (02:03 UTC Thursday).

Four astronauts will launch inside Crew Dragon Endurance for this mission—NASA astronauts Raja Chari, Tom Marshburn, and Kayla Barron, as well as European astronaut Matthias Maurer. After docking with the space station on Thursday, the astronauts will spend about six months in orbit performing a variety of science and maintenance operations.

Poor weather precluded an initial launch attempt on Halloween. Conditions at the launch site weren’t bad, but flight controllers were concerned about high seas and strong winds offshore, where an extra-tropical system raged across the northern Atlantic Ocean. Had there been an emergency during the Falcon 9 rocket launch, the Crew Dragon spacecraft would have had to escape into unacceptably poor surface conditions.

SpaceX’s William Gerstenmaier said during a Tuesday night news conference that a drone ship positioned offshore to catch the Falcon 9 first stage after launch, Just Read the Instructions, had been battered by 20- to 25-foot seas over the past week.

“There’s been some pretty rough weather off the coast,” Gerstenmaier said. “It’s been tough on some of our drone ships that are sitting out there waiting to recover the boosters.” SpaceX will instead use a backup drone ship for the first-stage recovery and bring Just Read the Instructions into port.

These offshore storms have somewhat subsided, and forecasters now anticipate a 70 percent chance of favorable weather for a liftoff Wednesday evening, with good downrange conditions.

In addition to weather, NASA said a “minor medical issue” with one of the four astronauts on the Crew-3 mission also contributed to a three-day delay in the launch attempt. Holly Ridings, chief flight director at Johnson Space Center, said Tuesday night that this problem had been cleared up.

“We don’t typically talk about details of individual crew members,” Ridings said. “We have an entire health stabilization program. There’s multiple folks involved to make sure that we don’t take anything to orbit. Obviously, you can understand that in an enclosed environment like the space station, you’ve just got to be really careful before you leave the Earth to make sure that there’s nothing that could happen to them while they are on orbit.”

NASA did say the issue was not related to COVID-19.

Climate Change Not a Driver of Madagascar Drought, Analysis Finds

The US National Space Council Is Back and Focused on Security