But apparently not a lot of people realise this.

According to a Pew Research Center study of over 2,500 adults in the U.S., 83 percent of Twitter users who said their accounts were private – or who said they weren’t sure – actually had accounts that were public for the world to see. In total, 89 percent of the adults who took part in the study had public profiles. 21 percent of adults said they think “nobody” sees their tweets, meanwhile, and only half “consider how their activity on the site might portray them.” 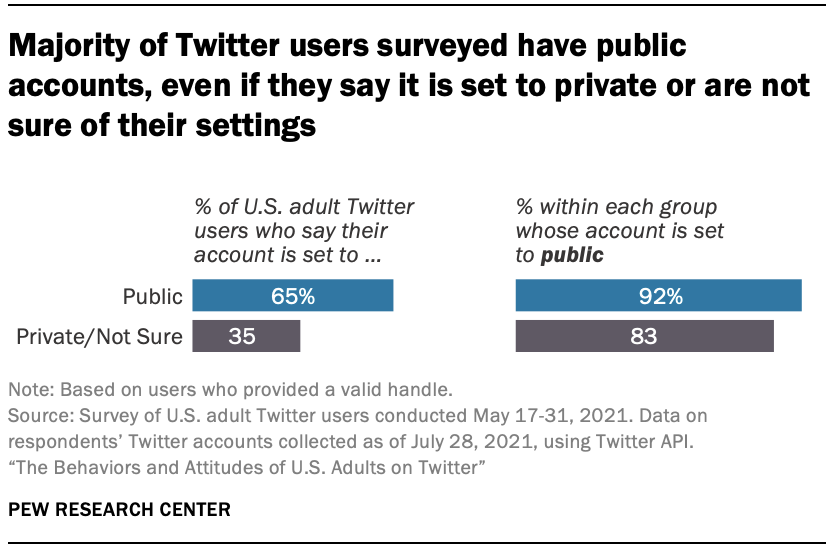 Twitter has been around since 2006, meaning if you were one of the earlier adopters you’ll have aged quite a bit since you first got your account. Maybe you’ve changed since then, and maybe you have an embarrassing Twitter history that you no longer want the world to see. The thing is, your tweets are public by default. They’re visible to everyone, whether or not the person looking has a Twitter account.

For a step-by-step breakdown of how to make your account private (aka “protect your tweets”), you can visit our how to use Twitter guide. It’s worth noting, of course, that this still won’t make them invisible — if someone follows you they’ll still be able to see what you tweet, and they could always screenshot that and share it out publicly. Being careful what you tweet is always the safest bet.

Elsewhere, the study had a number of other interesting finds regarding how people feel about Twitter. 46 percent of those surveyed said the platform had “increased their understanding of current events in the past year”, for instance, while over a quarter of users said the platform had increased their stress levels. Notably, 33 percent reported seeing “a lot of misleading or inaccurate information” on Twitter, with 53 percent saying this was a major problem on the site.

In terms of usage, the top 25 percent of tweeters produced a whopping 97 percent of all tweets from the U.S.

You can read the full study here, along with this companion research about how news is consumed on the platform.