All the best air fryers on sale for Black Friday

This year’s shopping season is going to be no joke — which is why so many retailers are starting their holiday sales early. Air fryers are expected to be hot ticket items this year (just like last year) and we’re already seeing some solid deals on fryers from major brands like Ninja, Instant Pot, Philips, KitchenAid, and more.

Supply chain issues and shipping delays across the globe almost guarantee that the most popular products like air fryers will sell out and be unavailable at some point during the shopping season. With that being said, if you see an air fryer that you want on sale, scoop one up for the foodie, busy parent, or lazy cook in your life while they’re still in stock.

Last year leading up to Black Friday, we saw major discounts on multiple Ninja Foodi devices, as well as a Walmart deal that brought the Instant Pot Duo Crisp down to only $79. This year, we’ve already spotted the Ninja Four Quart Air Fryer at over $50 off at Walmart, which has gone out of stock once and is now live again. (As of this writing, at least.) If this deal is any indication of how this shopping season will go, we’ll see big discounts for short amounts of time — the products are sure to go fast. 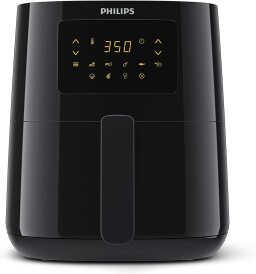 Sure, Philips might be more well known for smart light bulbs, but they’re also onto something with their air fryers. This model has the proprietary starfish design, which heats quickly and allows for even, crispy cooking. It also has a touch screen with seven cooking presets, holds up to 1.8 pounds of food at a time, and all the removable parts are dishwasher safe for easy cleanup.

This deal brings the price of the Philips Essential Compact Air Fryer to the lowest Amazon price we’ve seen, so scoop one up while they’re in stock. 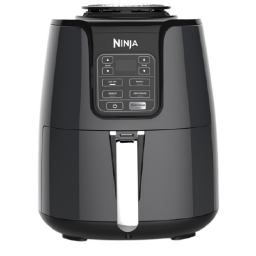 This deal has already sold out once this shopping season, and it’s likely to sell out again. The beloved Ninja Four Quart air fryer has a wide temperature range of 105 to 400 degrees Fahrenheit, which allows you to dehydrate or crisp. The one-touch controls are simple to use, just choose from one of the four cooking presets (air fry, dehydrate, roast, or reheat) or manually set the desired time and temperature.

The retail price on this air fryer is $119.99, so this discount is only $3 away from the lowest price we’ve ever seen on the model. Considering the exact same air fryer is $99.99 at Amazon, buying from Walmart will save you over $30. 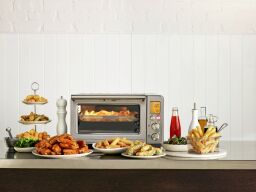 One of the best air fryers we’ve ever tested, the Breville Smart Oven Air Fryer is a true kitchen workhorse. Not only does it crisp up foods evenly, it also acts as a top notch oven for baking, roasting, and slow cooking — and it cooks food up to 30% faster than your conventional oven. At $70 off, this is a rare deal that you should definitely jump on. 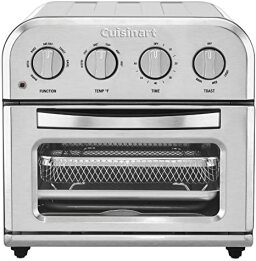 Ideal for small spaces, the Cuisinart TOA-28 packs all the power of the well-loved Cuisinart TOA-60 but at a fraction of the size (and price). It features six functions (convection bake, convection broil, air fry, toast, bagel and warm), can toast up to four pieces of bread at once, and is still big enough to cook an entire three pound chicken.