Video games aren’t inherently toys, but our toys of the 21st century can easily offer up video games as part of their package. Nintendo gets it.

The beloved Japanese game publisher and developer wowed elder fans in 2020 with the launch of Game & Watch: Super Mario Bros., a $50 handheld gaming device that’s roughly the size of those old Nokia feature phones (though Nintendo’s are significantly thinner). The earlier release packed in plenty: Two entire Mario games, including the original NES classic Super Mario Bros. as well as its previously Japan-only sequel, plus a very simple juggling game modeled after the original Game & Watch line, and a thematically appropriate animated clock.

Now, with 2021’s Game & Watch: The Legend of Zelda, Nintendo’s novel handheld officially levels up. The first Zelda game, basically an early example of an action RPG, is immediately more involved and complex than Super Mario Bros. It’s one of three Zelda games included in this package, alongside Zelda II: The Adventure of Link and The Legend of Zelda: Link’s Awakening. The throwback Game & Watch minigame and animated clock are also back, this time with a Zelda theme, and there’s an animated timer.

A little history for those who might not know: The NES wasn’t Nintendo’s first dance with video games at home. A couple years before the iconic console’s 1983 launch in Japan, Nintendo had a line of handheld gaming devices called “Game & Watch.” These diminutive, battery-powered curiosities featured extremely low-tech and easy-to-grasp games that played on a rudimentary liquid-crystal display. With the simplest options costing around $20, they were also priced in a way that wouldn’t fill parents with terror.

The 21st-century Game & Watch revival is built to carry the same kind of appeal. They’re relatively cheap (at least compared to most modern game-playing hardware) at $50. The games, while more involved than the OG Game & Watch titles, aren’t graphically intense by today’s standards. They’re just old and widely adored NES games baked into a package that lands like a nostalgia bomb.


All of that was as true with the Super Mario model in 2020 as it is with the Zelda model now. But the new release also feels like a step forward in some ways, and it starts with the selection of titles. The inclusion of an entire third game is no small thing, for one. But it’s not just more to play, it’s also a more exciting spread of options.

The Legend of Zelda, the first one, should need no introduction at this point: Link’s classic quest to defeat Ganon is about as synonymous with “video games” as Mario himself. Zelda II: The Adventure of Link should be a big surprise to those who never encountered it for the way it experiments with some unique-to-the-series ideas, like a heavy emphasis on side-scrolling gameplay. And finally, the Game Boy sequel to Zelda, Link’s Awakening — which was reborn as a beautiful Switch remake in 2019 — is presented here in its original monochrome form.

There’s not really a direct comparison to be drawn between Mario and Zelda; they’re fundamentally different types of games. But the latter is inarguably a more story-driven affair, offering deeper hooks for a modern audience than Nintendo’s definitive platformer. Also don’t forget, The Legend of Zelda released three years after the NES launched, so this Game & Watch showcase captures a slightly later evolution of formative video games.

The clock and timer are neat Zelda-themed affairs that count away minutes and seconds as Link wanders and fights through familiar Zelda settings on autopilot (though you can take control, too). Nintendo really needs to set these things up with a charging stand of some kind, though. I’ve engineered makeshift docks on my nightstand to make both Game & Watch devices work as bedside alarm clocks, and it’s so cool.

The size of the new Game & Watch line — Mario and Zelda are identical in this regard — may also be a problem for older players who have larger hands. The built-in directional pad and buttons feel fine, if a little mushy to press (as opposed to clicky). But the Game & Watch fits comfortably into the palm of your hand. Large-fingered players will quickly realize it’s easy to press the wrong button, or multiple buttons simultaneously, just because of the lack of real estate. 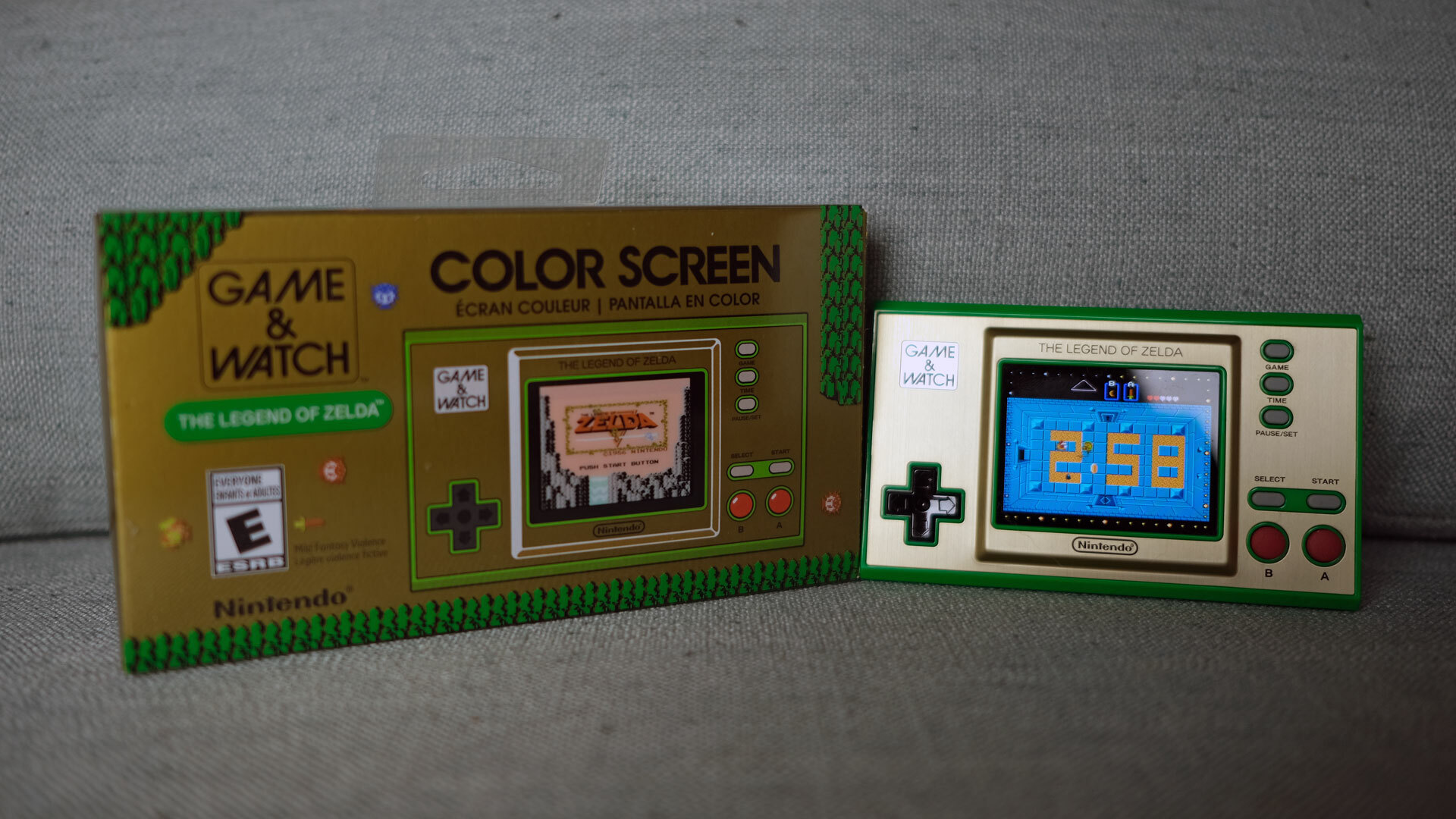 With all that said, this Zelda Game & Watch is a hard package to resist if you’re all-in on Nintendo. The superlative lineup of games, which also includes a Zelda-themed remake of the classic Game & Watch title, Vermin (a dead-simple take on Whack-a-Mole, basically), is the top selling point. Sure, you can play all of these games elsewhere, and on screens that measure larger than 2.5 inches. But there’s something special about playing on this delightfully portable little handheld, which fits in pretty much any pocket or pouch.

Maybe it’s the amount of care that went into the design, from the light-up Triforce on the back of the unit to the animated clock and timer-pulling elements from Zelda and Zelda II, respectively. This new Game & Watch isn’t any more “premium” than the last one — it’s a little plastic device with rubberized buttons and a sharp-yet-exceedingly tiny LCD screen. But for fans old enough to remember Game & Watch, the nostalgia pull is strong when this hunk of plastic and circuits nestles into your hands.

It’s not just nostalgia, though. Think back for a minute to the NES Classic and SNES Classic releases. Those pint-sized recreations of classic Nintendo consoles, each bundled with tens of games, dazzled with their form and function both. They sold out in an instant and quickly became highly sought-after holiday gifts. While many of the games they offered were playable elsewhere even then, there was something distinctly novel about playing on the Classic consoles and their satisfyingly authentic throwback controllers.

In many ways, these now-two Game & Watch revivals represent a distillation of that same idea. Nintendo has come up with a pint-sized and relatively low-priced toy for adults that any games-loving kid can enjoy, too. It’s retro in that particular way of 21st-century pop culture, where it feels like a piece of the past that’s been freshened up for the present.

Game & Watch: The Legend of Zelda doesn’t rewrite the basic script Nintendo came up with for 2020’s Mario edition. It’s simply more of a good thing. In a world of gaming where adult-oriented toys cost hundreds of dollars up front and then hundreds or thousands more in individual game purchases, here we have this $50 nostalgia bomb that delivers more than 30 hours of low-fi joy to the palm of your hand.

Turning a retro 1961 Renault into a flying car — Future Blink

Google may debut its own smartwatch in 2022