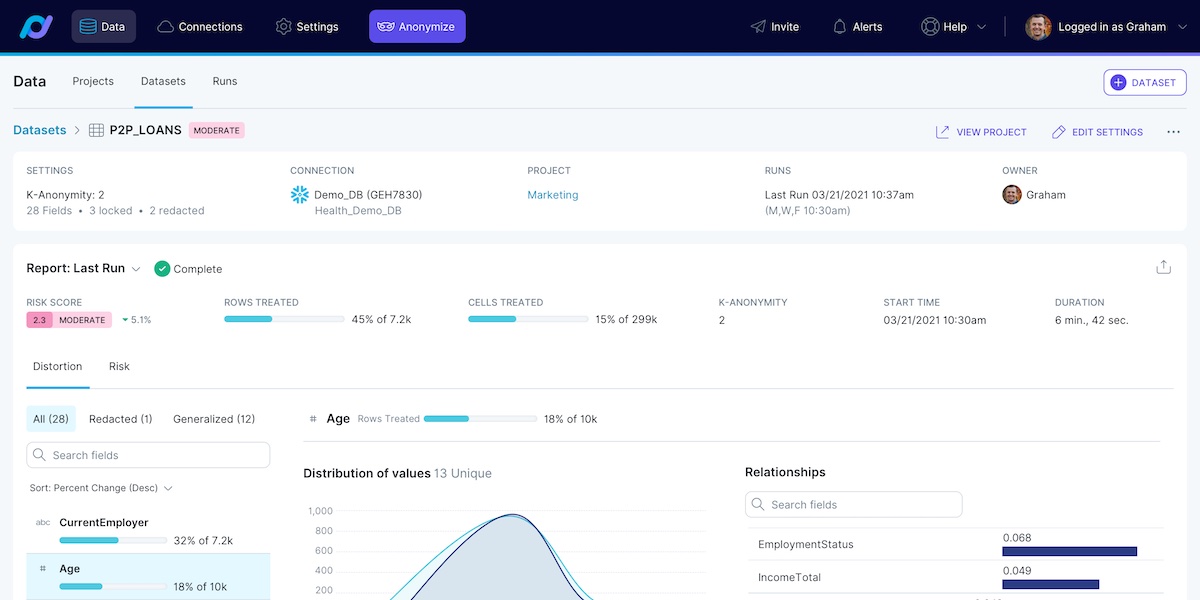 Privacy Dynamics, a startup that aims to make data usable for engineering teams while eliminating the risk of disclosure, today announced the launch of a new software-as-a-service app that it describes as an easy-to-use “de-identification tool” for anonymizing data. The app is capable of anonymizing thousands of records per second and requires only a single click to operate, according to founder and CEO Graham Thompson.

The launch comes as data privacy remains a top concern across both the consumer and commercial spheres. Gartner has forecast that by 2023, 75% of the world’s population will see its personal information covered under modern privacy laws. Among other things, this means that enterprises should increasingly focus on bringing automation to their privacy management system, the research firm said.

Founded in mid-2019, Privacy Dynamics was inspired by the many questions that Thompson fielded from customers about whether the data they were using was adequately anonymized. He previously worked on teams at Microsoft that included Azure developer relations and civic technology, where he helped enterprise and government customers to navigate privacy regulations such as GDPR as they migrated to the cloud.

In addition to the concerns from customers, on the developer side, “we heard countless complaints about the pain caused by privacy policy coming down from the top,” he said in an email to VentureBeat. “We built Privacy Dynamics for engineers, under the belief that they have a high standard for ethics and simply need better privacy tools.”

The company’s software “stands apart because it is precise, fast and efficient,” Thompson said.

“When anonymizing data, we use a scalpel instead of a sledgehammer so we ensure data is both safe to use and actually useful to data teams,” Thompson said. “The tool analyzes re-identification risk at the cell level, which drastically reduces data distortion compared to a column-wise approach. This allows data engineers to do more with the treated data and get access to it more quickly.” This approach cuts data distortion by 90% versus industry standards, according to Privacy Dynamics.

In terms of use cases for the tool, the startup says the software could enable machine learning engineers to create training data on-demand. It could also power business intelligence dashboards for business team members and enable sharing of data with external partners, without risk of privacy violations, according to Privacy Dynamics.

The Seattle-based startup also worked to make the tool easy to set up and use, with a “plug-and-play” framework, Thompson said. The software supports popular data warehouse providers such as Snowflake, BigQuery, Microsoft Azure, and Amazon Redshift. Crucially, treatment of data offered by Privacy Dynamics satisfies regulatory requirements including HIPAA, GDPR, and CCPA, the company said.

Privacy Dynamics is not disclosing how many customers it’s been working with so far, or the names of any customers.

Along with debuting its de-identification tool, Privacy Dynamics today announced raising $4 million in seed funding to help with further developing its product and expanding its team from its current headcount of 13.

Other recent funding rounds for startups focused on enabling data privacy include $45 million for Skyflow and $30 million for Duality Technologies, both in October. Trustpage, which enables SaaS vendors to easily communicate their data security and privacy measures, this week announced a $5 million seed round.